If you are a fan of history and you want to know all about the origin of the city, then here we provide you with this brief archeological tour in Valencia, in which you will discover the remains of civilization that took place in the city of the Turia river. It is always the perfect time to participate in tours in Valencia, to discover the city.

We start off with the Roman era, which is followed up by the Islamic era. Last but not least, we end the tour with the christian era. If you don’t know what to do in Valencia, this is your plan! 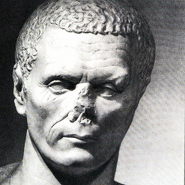 Valencia was founded by the Romans in the year 138 BC. The Roman consul Décimo Junio Bruto gave his lands to his men, to show gratitude and out of courage and bravery; he named it ‘Valentina Edetanorum‘, the city of the brave.

Valencia was a place strategically located, because of its position next to the Mediterranean Sea where Valencia crossed with Via Augusta, which connected Rome and Baetica (Andalusia). 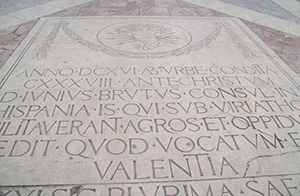 We start the brief archeological tour in Valencia in the heart of the city, at the Cathedral of Valencia at Plaza de la Virgen. Here we can find the first marks of the Roman Valentina.

On the floor of the square, you can find the first symbol of the city of Valencia: a horn of plenty for the god Jupiter.

Plaza de la Virgen was a Roman forum, the nucleus of the city and the place where the most important buildings of the city were located.

We continue the archeological tour in Valencia by leaving the square. There we find two main streets that were important in the Roman era: the Cardo and the Decumano. Nowadays, these streets are known  as Calle Salvador and Calle Caballeros, and they are two of the most well known and busiest main streets in the center of Valencia.

If we walk towards the end of these streets, to the point where you come across Plaza de Almoina, an essential stop has to be made there in our archeological tour. 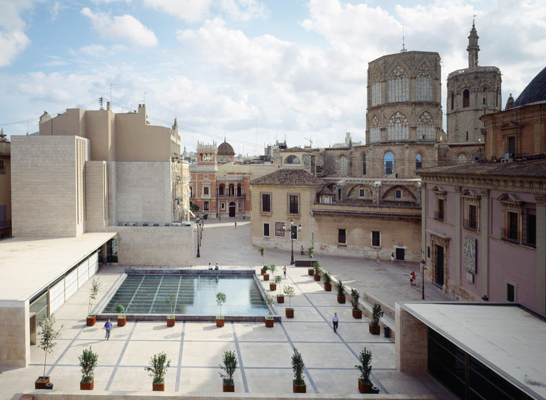 Plaza Almoina has more than 2100 years of history and below it you can find the oldest archeological site in Valencia, that was discovered in 1985 while working on a metro line. Nowadays, you can take a look and admire the remains of the ancient thermal baths underneath a glass floor of 300 meters.

On the square, you can find the Almoina Archeological Center, which is again, another essential stop in our archeological tour in Valencia. The museum is considered one of the best archeological centers in Europe. You can find the remains of the excavated site and you can look at buildings which laid the foundations of the city.

During the excavation, they have discovered traces of soldiers’ bodies as well as their equipment, with obvious signs of aggression during the attacks. The museum also display remains of the Islamic era and the Christian era. 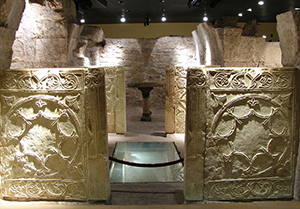 To continue the archeological tour in Valencia, another interesting point is the Crypt on the San Vicent Mártir prison, located at Plaça de L’Arquebisbe, numero 1.

It is incredible what the excavations have brought to light, as there are remains of all the historical stages in Valencia: the burial of bishop Valentino, the Islamic palace bathrooms and a chapel built in gothic style that is known as the prison of San Vicente

We continue our archeological tour in Valencia by looking back on something historical: In the year 75 AC, the city of Valencia was partially destroyed during the war between Pompeyo and Sertorio. Various texts have been found, which say that large Roman walls were built as a defense of the city. However, no remains have been found.

It wasn’t until the 11th century during the reign of the so called taifa, a Muslim ruled principality, that the city was reborn again in all its glory. One of the biggest Arabic legacies the city had is the Arabic wall. The wall belonged to king Abd Al-Aziz and still has soms remains left. It is seen as one of the most perfect ones of Al-Andalus (Muslim Spain).

If you want to take a look at the remains of this era, then you should definitely visit the neighborhood del Carmen, as there are various must-visits there. Here are some streets you should visit:

Area 4. Valencia in the Christian era

The conquest of Valencia during the reign of Jaime I in 1238, was the end of 5 Islamic centuries. The Christians became the next inhabitants of Valencia and they ‘closed’ the city by building a big wall, which Pedro IV of Aragon (called: Pedro el Ceremonioso which is Spanish for the ceremonious) commanded them to do. They didn’t destroy the Arabic wall, because it was used as a defense.

The Christian wall consisted out of 12 doors. Two of them still exist and you can visit those during our archeological tour in Valencia. They are known as the Quart Towers and the Serranos Towers. In this last stop of the tour, you can see the impacts of the French artillery that were made during the War of Independence. There were a total of 132 cannon brands located.