At the beginning of the 20th century, a new artistic movement found its way to Valencia: Modernism. This modernism tour in Valencia is the opportunity to admire this style

A tour in Valencia gives you a chance to observe the city with your own eyes. You can discover the history of Valencia by visiting the museums, by participating in an archaeological tour in Valencia, or by doing a gothic architecture tour. Here we have another suggestion for you: a Modernism tour in Valencia.

At the beginning of the 20th century, Valencia went through an evolution that is known as the art movement Modernism; where a variety of buildings and constructions went from the architectural style Rationalism to a more romantic style.

In this time, Valencia took over some characteristics of this movement. Such as the use of iron, the ceramics and the glass in the buildings, as decorative materials.

The Modernism tour in Valencia: directions

We start our Modernism tour at Plaza de la Almoina; you should remember to go down the square, where you will find the archeological site of Valencia. There you will find the modernist building Punt de Ganxo, in its facade you can see pilasters that look like trunks, and its balconies are made of stone. They’re different than others. 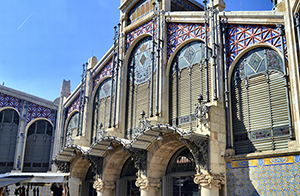 From here, we are going to Plaza de la Reina, look for Plaza del Mercado to look at the Casa Ordeig, which was constructed from 1907 on, with aspects that were inspired by la Lonja.

In front of  la Lonja, you can find another modernist building; the Central Market, which was constructed between 1910 and 1928. It has a dome of 30 meters high. The ceramics, iron, the balcony and especially the stained-glass windows that are used to decorate the exterior and the interior of the building. Other decorative elements are the two wind vanes: a swordfish and a parrot. These are known under the name of the ‘Cotorra del Mercat‘. 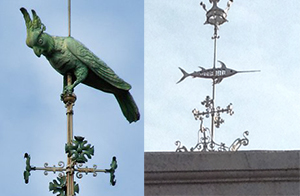 From the Central Market, you get closer to the Valencia North Station, which officially opened in 1917. The station is one of the most beautifully decorated ones in the country. Filled with pieces of ceramics, mosaics and tiles with a design of the Horta of Valencia; which is the symbol of the city. Especially highlighted is the facade full of oranges. In the inside, you can find various mosaics which say hello or goodbye to tourists in various languages. On top of the North Station building, you can see an eagle made of iron, a symbolization for the speed. 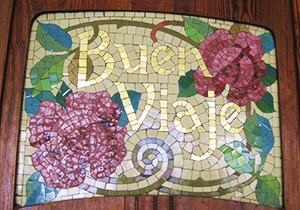 From there on, you can go to Calle Colón, one of the main streets that has a great number of stores.

If you go to the street Sorní, you can find the Casa de los Dragones, designed in 1901 and which’s main ornaments are flowers and dragons. The the building took the name of ‘medievalismo fantástico’ which literally translated means: fantastic medievalism. 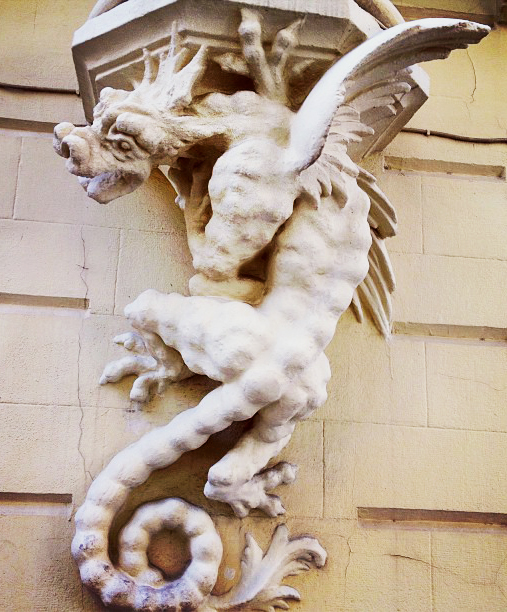 From here on you are able to look at the locomotive that you can find on the facade. Fact: the star that you can see on it just a symbolization for the Northern railways company.

If you continue to walk, you will come to the Colon Market, which they started building in 1914 and where you can rest and relax a bit. The Colon Market was totally restored in 2003 and has become  a meeting point with local stores and shops and is declared a National Monument.

After you have rested for a bit, you should go to the Gran Vía Marqués del Turia, where you can put your eyes on two more Modernist buildings, the Casa Ortega and the Casa Chapa.

The journey continues. This time on the other side of the Turia river, where you can walk to one of the bridges that cross this one, such as the Puente del Real and take a stroll around La Alameda. 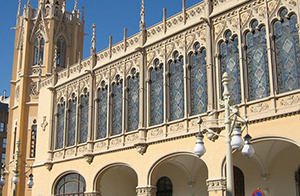 From the Paseo de la Alameda, you can go visit the Exposición Palace, which was built in only 7 days in the year 1909. Continue walking and you will find Asilo de la Lactancia, a newborn nursery which is now called Balnerario de La Almeda, and the Fábrica de Tabacos, which is now a citizen care office for formal procedures and municipal services.

Now you are already on the outskirts of the city and to finish this Modernist tour, you can vist the Asilo de San Juan de Dios, which is close to the Malvarrosa beach and the mansion and  the garden of Ayora.

Don’t miss out on any of these historical monuments in Valencia!