A recorded 177,000 people reigned down on Benicassim on the 13th to the 16th of July 2017. FIB 2017 was an event to match all the international festivals headlining Red Hot Chili Peppers, The Weeknd, Years & Years, Kasabian, Dua Lipa and more.

For those who did not have the pleasure of experiencing FIB 2017‘s rock star production we want to give you the highlights. Learn about this summer festival near Valencia, the vibe, the beach, and tips for FIB 2018.

FIB 2017 officially opened on July 13, but camping grounds were open 24/7 Monday to Monday (that’s three days before the festival started). For the majority of campers arriving either on the Thursday or Friday it was incredibly well organised. Camping areas were sectioned off, some had handmade shaded areas and others unfortunately did not. We highly recommend trying to get their early to get a nice spot under the shade because as you can imagine FIB 2018 will be scalding hot.

FIB festival gates opened around 18:00 each day which left the morning and afternoon to lounge out on the beach recovering and tanning for hours until it was ready to head back in.

FIB 2017 vibes were eagerly spread by the fellow English, Irish, and Spanish natives. Either by sheer coincidence or incredible organisation this crowd has been one of the most social festivals we have been to. Either laughing at hysterical outfits or spreading our arms for embracing hugs, FIB 2017 was lit.

Stormzy, Kaytranada, and RÜFÜS. If you know these three names then you know just how unique FIB Spain is and can expect a greatly epic lineup at FIB 2018. The styles of each stage were incredibly varied letting you decide just what you wanted to hear.

Stormzy turned up the entire crowd unleashing one of the largest mosh pits we saw, the crowd probably rapped his lyrics harder than he did “Oi Rude boy!”

Kaytranada‘s base line was irresistible to everyone’s waist line letting loose an incredible flow. He laid down his head bobbing beats so hard it sent the crowd vibing hours after his show.

RÜFÜS (de sol) did what they do best which is seamlessly drawing us ever closer and closer to the dance floor. Sundream brought us all into an inescapable magical trance dance.

Although these shows stood out for us credits go to all the artists at FIB 2017 for an incredible experience altogether. Insider tip – check out the south beach pool party for the most incredible mega hit throwbacks of our generation.

The organisation did a wonderful job on keeping the people in mind.

They new exactly where bottlenecks would be and sectioned off areas to avoid congestion.

The FIB App was brilliant, it included maps of the venue, camping, bus lines, Benicassim city, and parking areas, schedules, line ups and more. The schedule systems allowed you to star your favourite artist which promopted you when they were going to begin.

For the die-hard fans who went all the way to the front they even had water prepared to hand out for free.

Security was on point yet unnecessary as the incredible 177,000 was too engaged with music to cause serious concerns.

Sun’s out, Guns out!

We highly recommend this music festival in Valencia so plan ahead. Here’s our recommendations for getting to FIB 2018: 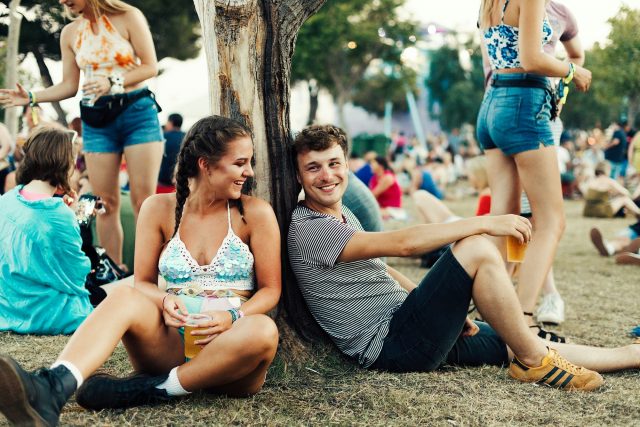 How to get to FIB

Bus – FIB shuttle service from Valencia Airport or Barcelona. Buses also go to neighboring villages like Castellon. Costs about 20 euros. Shuttle buses went to and from the festival (and camping) to the beach, Valencia, Barcelona, and Benicassim train station

Train – Train from Valencia takes about one hour, costs about 7 euros one way

Taxi – Cabs from the airport will be expensive, but from the train station should cost approximately 8 euros to the festival